Exciting Time in Sports and the Launch of All About Sports 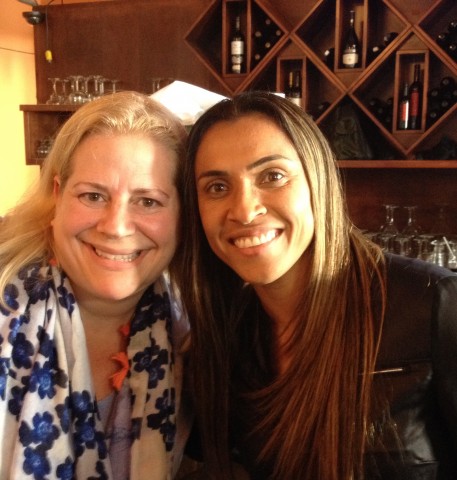 The All-Time World Cup Scoring Leader, aka Marta.
It's such an exciting time for sports – and to launch All About Sports! With the Women's World Cup starting June 7 there is clearly something special going on. Maybe it's the increasing support for equity across all sports. Maybe it's the continued building of the Canadian Team, which hasn't *yet* reached the success it so desperately wants. It can also be the US Team coming with a chip on its shoulder, looking to defend its title won in Vancouver, while simultaneously coming back from a disastrous campaign at the Olympics. Part of the momentum I attribute to the increase in recognition of and support for women's professional football, not just in North America just ask Pep click here to view video.

This is what I am going to love about what we're going to witness in France: People coming together from around the globe to celebrate a game they love, played at the highest level - which happens to be played by women. When I attended the matches during the Women's World Cup Canada, it was awesome to see families – moms, dads, daughters and sons, enjoying the sport. What was as cool as seeing the girls and young women wearing Sinclair, Marta, and Wambach jerseys, was seeing boys and young men wearing them, too! Great players are players. (full stop).

More recently, I watched the Women's Olympic semi-finals in Maracaña, Brazil's most hallowed ground of futebol, with the hosts facing Sweden. The Swedes won on penalties, but the Selecão Feminina scored a victory, too. They won over their country. Fans were dropping their Neymar jerseys for Marta. I overheard some local fans outside the stadium: "Why would I pay to go see the men? They just fall down and complain. This is real futebol." If the Cariocas in Rio were converted, that speaks volumes.

The USA is the odds-on favorite in the 24-team tournament, with hosts France right behind. Germany, England, Japan, the Netherlands, Sweden, Australia, and Canada round out the top 10, but as we saw on the men's side last year, it could be anyone's game. What these amazing players are proving is that it's also EVERYONE'S game!

Who do you think will win the World Cup? Which players are you most excited to watch?
Tweet
×
Stay Informed

When you subscribe to the blog, we will send you an e-mail when there are new updates on the site so you wouldn't miss them.

Will Toronto (finally) be recognized as a sports t...

More posts from author
Wednesday, 19 June 2019 Will Toronto (finally) be recognized as a sports town?

No comments made yet. Be the first to submit a comment